Goodbye To All (that don’t want to be here); We don’t like you, either.

One of these ridiculous essays (usually written by transplants, yuppies, sometimes suburbanites etc. who’ve moved at some point to Manhattan or western BK) about the “love-hate” relationships they have with New York enters my social media universe about once a month. More than a few liken the city to an abusive boyfriend (people, that metaphor is no longer original). I usually skim and discard, or avoid clicking on the links altogether. But I figured, why not be angry about something frivolous today? Elitedaily never seems to let me down on that front. 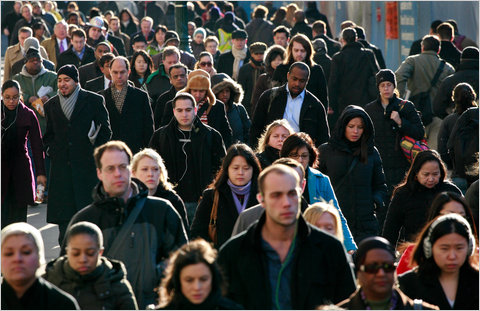 I need not explain anything, I’ll let the drivel (titled, “Goodbye To All That: 5 Reasons Why I’m Leaving New York”) speak for itself. Aside from rattling off some of what she thinks are NYC’s highlights (“the world-renowned restaurants, Soul Cycle classes and amazing outfits from Intermix”) this writer says:

“I often take pride in my New York edge when it surfaces internally, remembering with conceit, ‘That’s right, I’m from New York.’ But, then, I take a step back and wonder why I’m sneering at my barista for using the wrong kind of milk and snapping at the airport security guard for making me throw out my Chanel No. 5 because I’m the idiot trying to carry on a liquid over 3.4 ounces.”

All I gotta say to this chick is umm, being rude doesn’t give you “New York edge,” it just makes you rude. New Yorkers of all stripes may come off as a bit aggressive, because putting millions of people in one place creates a competitive environment and forces you to be more direct, and waste less time–this is all true. But New Yorkers are no more rude or less humane than people from any other city. And like in any city, if you’re nice to people they will reciprocate. So if people are rude to you, consider that it may be because you act like a ***** and no one has the time to pretend to like you.

The funny thing in all of this is, that airport security guard you snapped at is probably one of the few actual New Yorkers (outside of your handful of friends from the Upper East Side or Park Slope) that you’ve had a conversation with in your lifetime.

Let me tell you a little something about New Yorkers. Nice New Yorkers understand the grind and do our best not to take petty ish out on others (like baristas or airport security). In fact, some Nice New Yorker probably took a few seconds out of their day after you walked away from Starbucks barista you sneered at, to roll their eyes or talk some shit about you and make the barista feel better about being mistreated (yea, we do that.). Most of us don’t treat people like incompetent help because we been there, dealing with people just like you. Nice New Yorkers stop to conscientiously give tourists directions, even if they annoy us. Nice New Yorkers help old ladies across the street. On 9/11, many, many New Yorkers threw caution to the wind and risked their lives toiling for days on end in the rubble and gore to save other New Yorkers.

But yea, if you come at us the wrong way, any New Yorker, nice or mean, won’t hesitate to let you know what’s what.

I don’t hate transplants, or people who experience my city differently than I do–NYC is, after all, a large and multifaceted city with people of all classes and backgrounds. It‘s when people like the woman who wrote this essay think they speak for all when they barely even know any New Yorkers, or who have barely explored 30% of the city, without seeing the irony and their own hypocrisy when they talk about rising prices and gentrification squeezing them out. It’s like New York’s actual work force and lifeblood, and the diversity that made it into the “edgy” place they think they love, is totally invisible to them.

To this author, the many who came before and the many who follow with similar gripes: Goodbye, and good riddance. And stop telling people how “New York” you are, you’re giving us all a bad name.