Nipples, side-butts and the nouveau chic

This W Magazine piece is a fun read on the underwear-free trend, bringing to attention that the “elegant” celebrities are doing it these days, not just lost children of Beverly Hills. Is it a feminist trend? Simply for comfort? Maybe.

I personally believe all the extreme cleavage, nipples, side-butts, etc. are not so much political but a reflection of a new generation of influencers–people who don’t give a shit if their fashion faux-pas’ make some waspy, upper-east side grandma lose her pearls. Call it the democratization of fashion and pop culture–the socialites featured in Vogue are no longer the world’s taste makers. Instead they are ex-drug dealers from the projects. They are immigrants with glow-in-the-dark tattoos. They’re regular chicks on Youtube. Call them the nouveau chic. Wearing white after Labor Day, being seen in a dress too short and leaving your bra at home are all things that people are supposed to know are not allowed. But according to whom?

One of the reasons I love living in Brazil is because people here are free of a lot of the meaningless inhibitions we have in the U.S. To be sure, Brazilian women are very body-conscious in some ways, but in this respect they are very down to earth. Beautiful, elegant women strut around daytime and nighttime in white/sheer tops  and see-through sweaters with bright pink and neon yellow bras showing–not bandeus, bralets or other non-bra-looking bras, but full-on bras. It’s almost weird to see someone here in a tank top that DOESN’T have some lace peaking out of the collar, or something to give it a little sex appeal. In contrast in the U.S., this is a trend long embraced by some celebs but considered more edgy than mainstream. To some, it might even be considered low class and attention-seeking. Just read this debate following a Huffington Post piece on Elsa Pataky in a neon-yellow bra last spring. “Looks a bit cheap to me,” someone says. “Funny how some women will encourage stares and blame men for doing just that.”

In this post dedicated to bra etiquette last year on an online community for college women, someone posts a photos of Heiki Klum and Lindsay Lohan with black bras exposed and writes, “This is why the bandeau was invented so please use it. You’re not making a fashion statement with that black bra showing through your shirt, you look more like a hooker.” 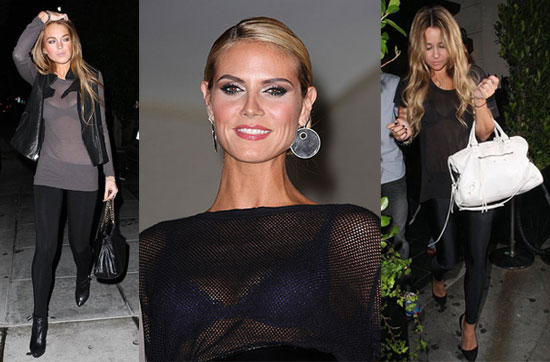 It could be that Brazilian women are just more willing to experiment with fashion trends. But short-shorts and mini-skirts here have never been reserved for the young and single, and EVERYONE wears skimpy bikinis, even if they’re fat, old or pregnant. I just read an article a few months ago in Portuguese about strange American customs and one of them was that we all like to wear “enormous” bathing suits. In truth, tiny Brazilian bikini bottoms (which, contrary to popular belief are usually not thongs) are much more flattering because they highlight the natural curve of your butt cheeks instead of a bunch of saggy fabric.

I should note that Brazilian fashion is not just about a little extra exposure. Women here also embrace more color day-to-day, and they are much more appreciative of my loud jewelry and high high-heels. I mean, really–it’s no wonder I like living here. Don’t hate, or as my co-worker once did, tell me you “can take the girl out of Queens but you can’t take Queens out of the girl.” FIRST OF ALL, that doesn’t insult me, I’m proud of it. Go to the back of your closet and pull out that outfit we all know you have, and love, but never had the guts to wear.

I think American culture is turning in this direction of freer expression. I still have some girlfriends who hide their pretty dresses away in their closets because “no one else dresses up at work” and many who are afraid to show a little cleavage, but I think the red carpet shows that we are collectively more willing to rebel against the norm. W Magazine suggests that women who are super-in-shape may be using indecent exposure as a way of saying “fuck you” to people with more than 8% body fat. I think it’s more that they represent the growing number of people who are saying “I don’t give a fuck” to anyone who thinks tradition should dictate how a person is to express themselves through clothing.

I’m not advocating that we all slap on some fishnets and crotchless panties to go to work. I love fashion, and I value good taste. But someone has to push the envelope, and people who are in the spotlight have a duty, really, to do it for our entertainment. So what if they end up on the worst-dressed list? In today’s times, I think it would be worse to let your stylist talk you into something boring and conservative.

PS: In my “culture,” we say first of all without following up with a second or third of all. I’m gonna say that’s nouveau chic, too. Get used to it!

One response to “Nipples, side-butts and the nouveau chic”